53 students started at Luther College on 11 February 1964.  Occupying our first facilities which comprised a handful of classrooms, a hall, an administration area, two boarding houses, a service building and residences for the Headmaster and Senior Master.

Luther College was established in 1964 by the Evangelical Lutheran Church of Australia as part of a national strategy to expand the church’s provision of schooling.

Our extensive corner site in Croydon was the perfect location for the third Lutheran school in Australia and the first in Victoria.

The years of preparation beginning in 1956, were spearheaded by Walter Paech. A prominent Lutheran, Walter significantly influenced the school’s first years.

John Paech (Walter’s son) was the Headmaster.  The students were mostly boarders with only eight students coming from families living in Croydon.

John was joined on the staff by Senior Master, Bill Oster, two additional full-time teachers and three part time teachers. Two of the staff also served as Master and Mistress of the Boarding Houses.

The first facilities included classrooms, a hall, an administration area, two boarding houses, a service building and residences for the Headmaster and Senior Master.

The first graduating class of 1967 was comprised of 13 students, four of whom were foundation students.

The Gospel message of God’s saving grace through faith was at the core of Martin Luther’s theology. It remains at the heart of our College.

The first prospectus of 1963 outlined the importance of Christian instruction and worship to school life, its offering of a solid academic curriculum, and the aim of helping students grow in all aspects of their being: spiritual, intellectual, social, artistic and sporting. 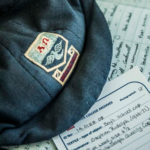 Luther College’s logo and motto were developed by our founders in 1963.

The Luther College logo incorporates a shield picturing an open Bible and a dove, and a scroll bearing the College motto.

The letters on the Bible, Alpha and Omega, are the first and last letters of the Greek alphabet. Their meaning, the beginning and the end, is one of the names given to Christ. This points to Jesus, who is the Lord of all things from the beginning to the end. The open Bible symbolises the source of all learning while the dove symbolises the Holy Spirit and the shield represents faith.

Unctio Eius Docet – The Holy Spirit is our Teacher – is taken from 1 John 2:27. It speaks to the understanding that Luther College operates under the guidance and teaching of the Holy Spirit. 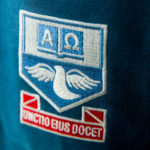 The Bell, the Clock and the Cross

An imposing tower comprised of a bell, clock and cross sat on top of the original main building.

These symbols represented ‘the development of lives that ring out clearly and joyously to God’s glory, time devoted thankfully to His service, and the sure hope of His saving grace – a powerful and constant motivation in this life’. – John Paech

Today, the same bell is incorporated in the large white cross located in front of the Chapel. 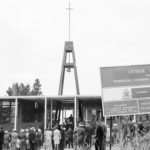 To pay tribute to our foundation students, in 2016, 53 trees were planted to form the Foundation Avenue at the front of the school. An additional tree was planted in honour of the foundation staff, acknowledging their service and confidence in our school at its inception. 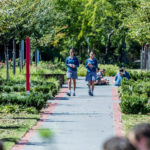 In February 2014, we celebrated our 50th anniversary with an open afternoon tea and a Service of Celebration and Thanksgiving that coincided exactly with the Service of Dedication in 1964.

On Tuesday 11 February, the entire community gathered in the quadrangle for Chapel.

It was a significant time of reflection, gratitude and anticipation. A reception was also held to celebrate the occasion.

Luther College’s six principals have honoured God and served the community with distinction.

With their respective teams they addressed the challenges and led the achievements that built and strengthened Luther’s outstanding reputation. They were always supported by strong Councils whose members were generous with their time and expertise.

Each season of leadership delivered exactly what was needed in that chapter of the school’s history and set the next one up for success.

We are deeply grateful to our forebears who founded and positively influenced our College.  Their vision, faith, courage, and passion means today’s community continues in God’s name, under his guidance and teachings, and for his glory.

We thank God for his grace and trust that his blessing will continue to rest on Luther College and the generations educated for their time within its gates.